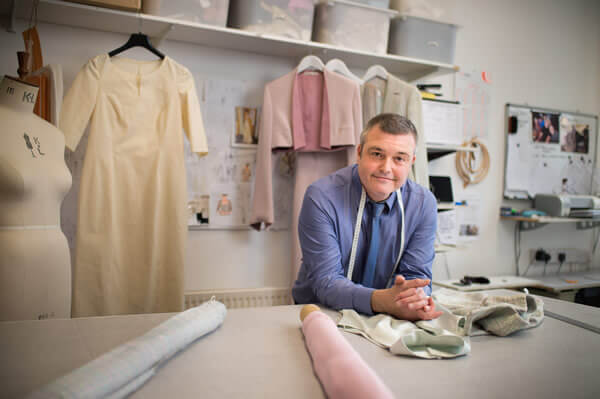 Rinaldo Girasoli studied fashion design in both men and womenswear at Edinburgh College of Art, graduating in 1995 with a 2.1 Honours degree. During his third year of University, Rinaldo was selected to study at the prestigious 'Belle Di Arte' in Milan where he learned a range of valuable skills. During his final year, Rinaldo's Graduate collection in Menswear was showcased in London during the 'New Designers Exhibition' and was also featured on the BBC programme 'Good Morning with Anne and Nick' that same year.

After graduating, Rinaldo began working as a freelance designer and illustrator before securing a job as a pattern cutter in the Bridal industry. Several years later, Rinaldo left in order to set up his own label and offer a unique service designing and making individual pieces by hand. With an inquisitive mind, Rinaldo learned to push the boundaries in cut and form.

Continuing with his label, Rinaldo also moved into teach design & pattern cutting at Edinburgh College of Art. It was during this time that his creativity was reignited, engaging with other inquisitive minds helped refocus his efforts. The role of lecturer developed and soon Rinaldo was responsible for teaching pattern cutting to all the year groups - from first year students to post graduate level students.

He continued to design and make for his own label but was also being approached by other designers to make sample garments for their collections.

Due to the growing demand for his own designs, Rinaldo decided to leave his teaching job in order to fully concentrate on his own design work. Shortly after, Rinaldo was approached by Thomas Hancock Ltd to develop their range of patterns for both women and menswear for the European and Japanese markets. This work involved creating a new size structure and developing a graded system specifically for Thomas Hancock. It was during this period Rinaldo worked on various patterns for other designers and tailors (through Thomas Hancock) such as Missoni, Alfred Dunhill, Gieves and Hawkes, Jaeger and Timothy Everett. He continues to this day supplying pattern work for other designers claiming that "a change is as good as a rest".